Reinforcements (or I’m going to need a bigger box)

July 2021 was a looong time ago. Lots of hobby stuff has happened, I just haven’t posted ANY of it for no particular reason.
I’ve been into Chain of Command for a while and have  been collecting a 101st Airborne force. 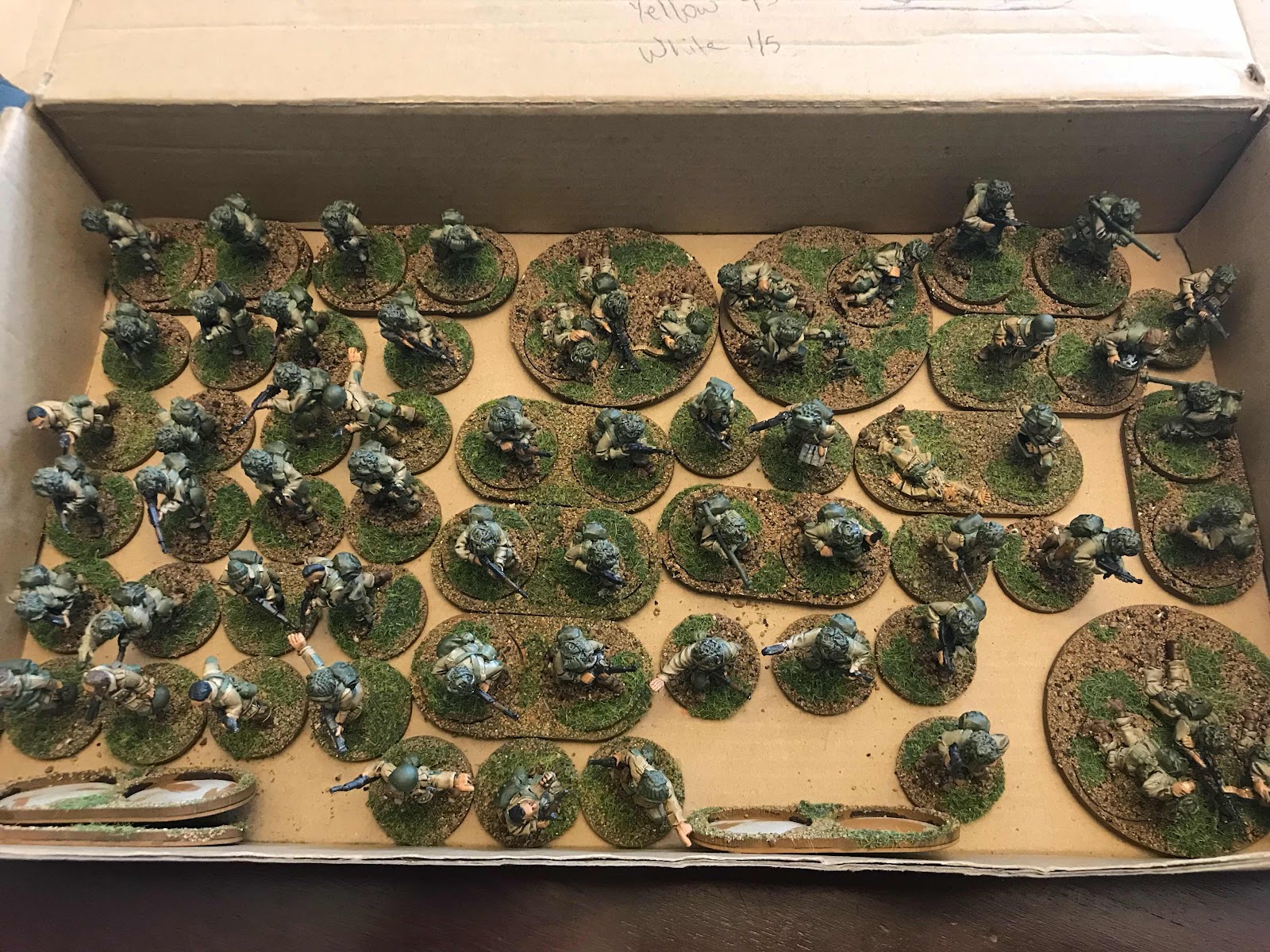 Looks a little cramped in the box so on the tabletop it looks like this: 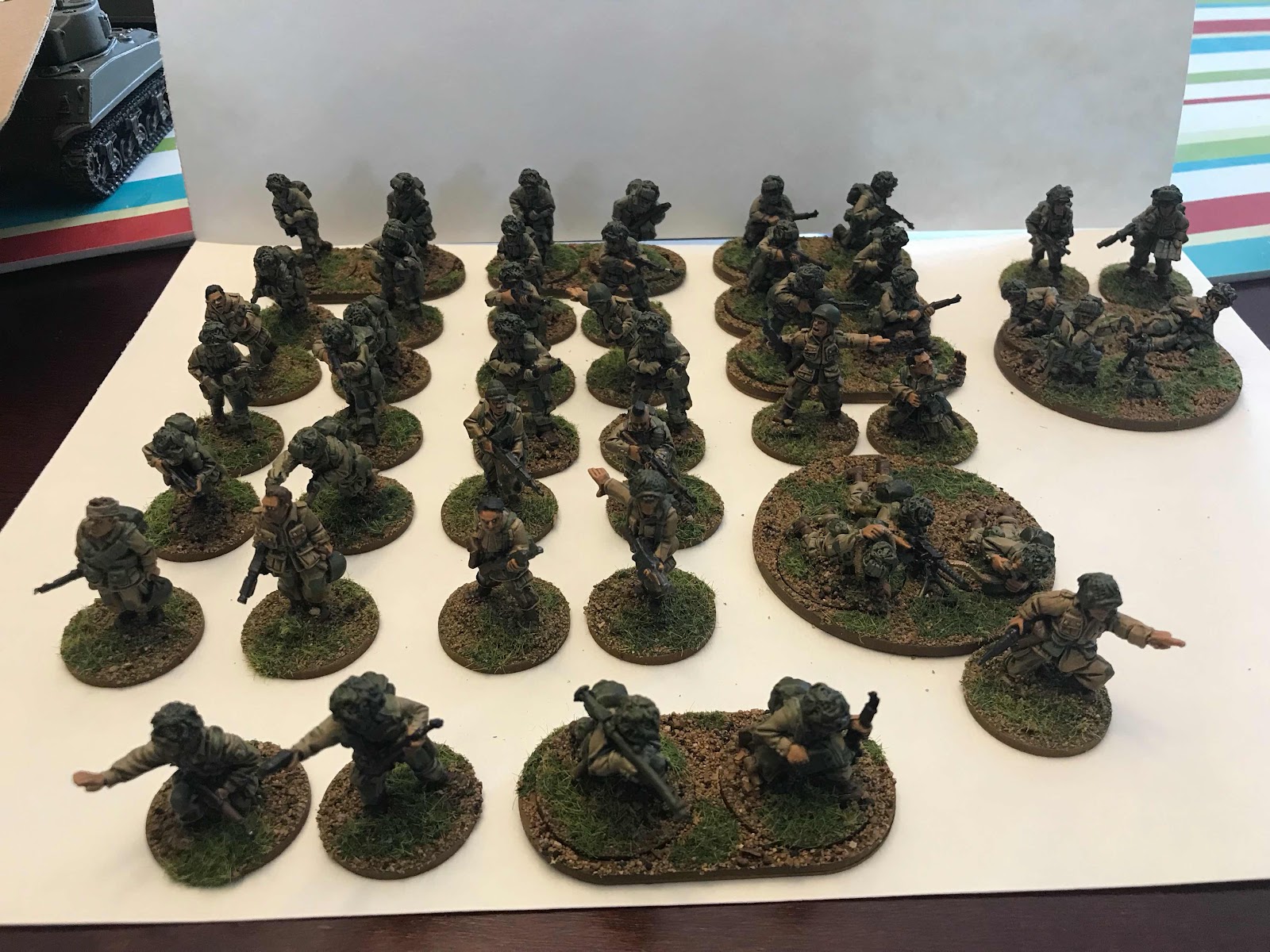 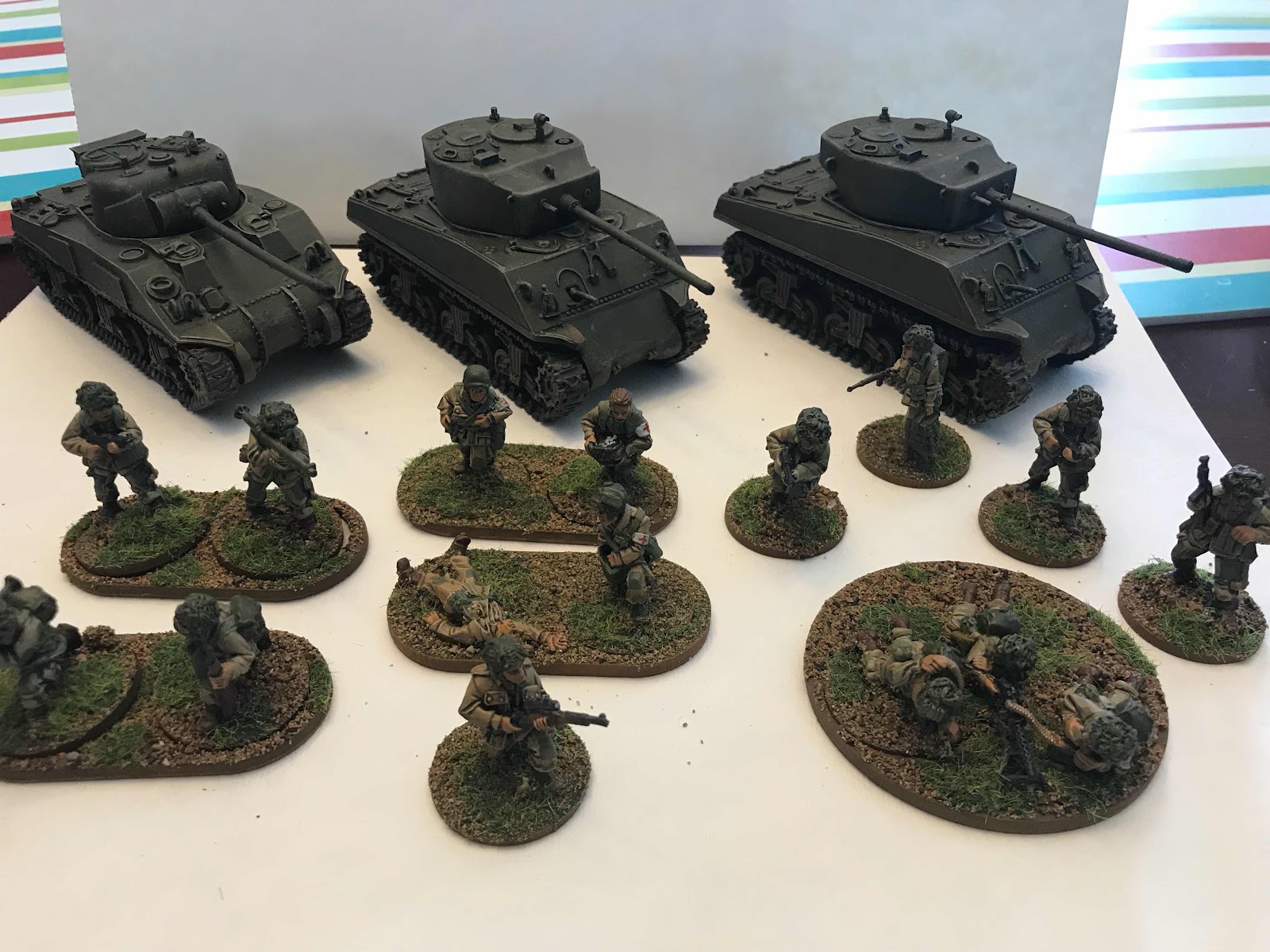 I also have two additional bazooka teams, three medics, a sniper, a MG and 4 spare infantry I can use to be a 3 man engineer demo team or to bump up the MG team to have 5 crew. Oh and two Sherman’s and a firefly for reasons. 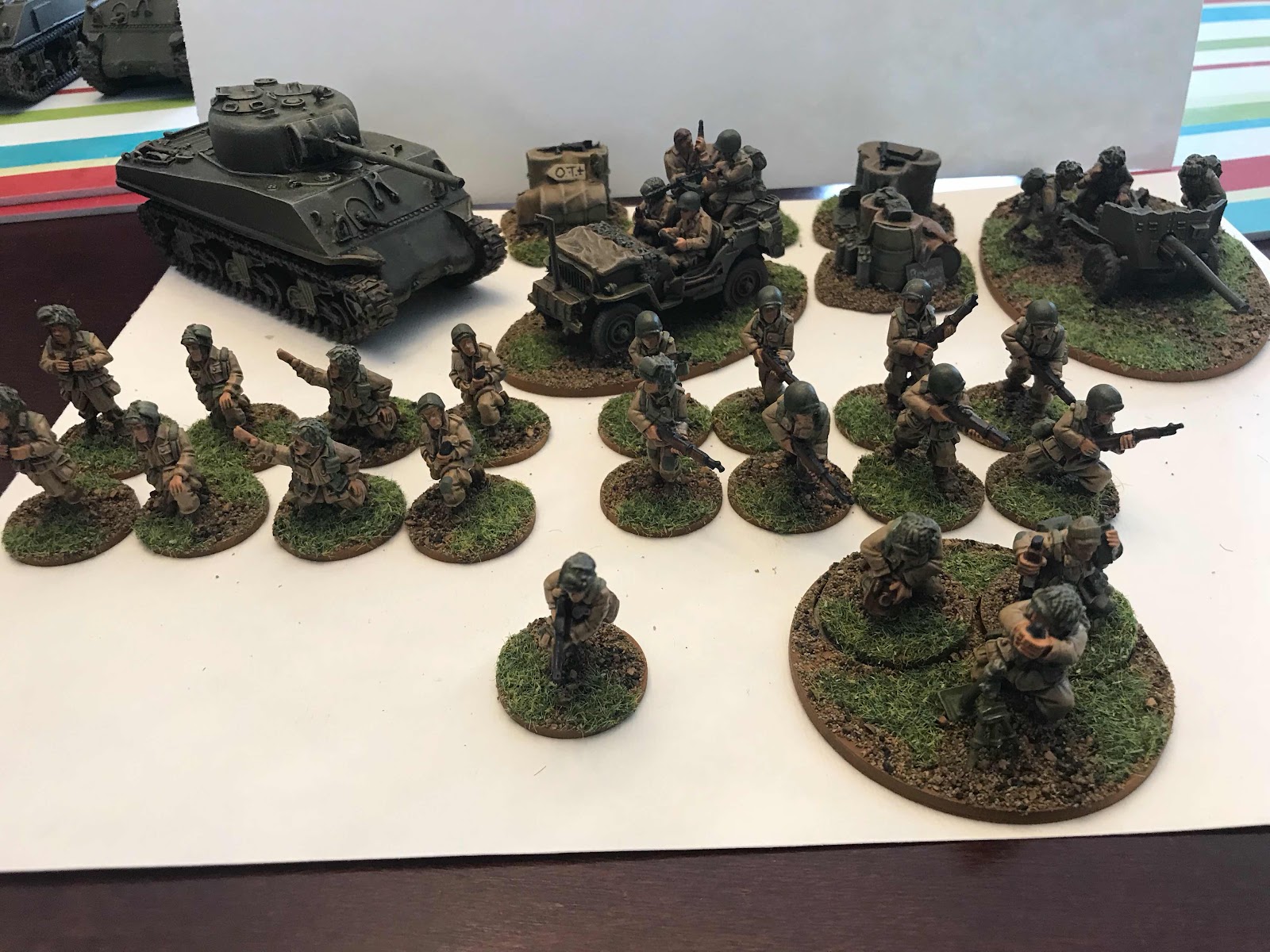 Finally the other pieces have been completed. Another Sherman which gives me a full tank platoon. A Jeep with a mounted MG. An anti-tank gun and another mortar.
I also grabbed 8 crew for the weapons teams as I don’t really like using riflemen for crew. And another 8 riflemen to get the three squads into full compliance with rifles instead of songs or carbines.
Here’s a scale comparison of the troops. 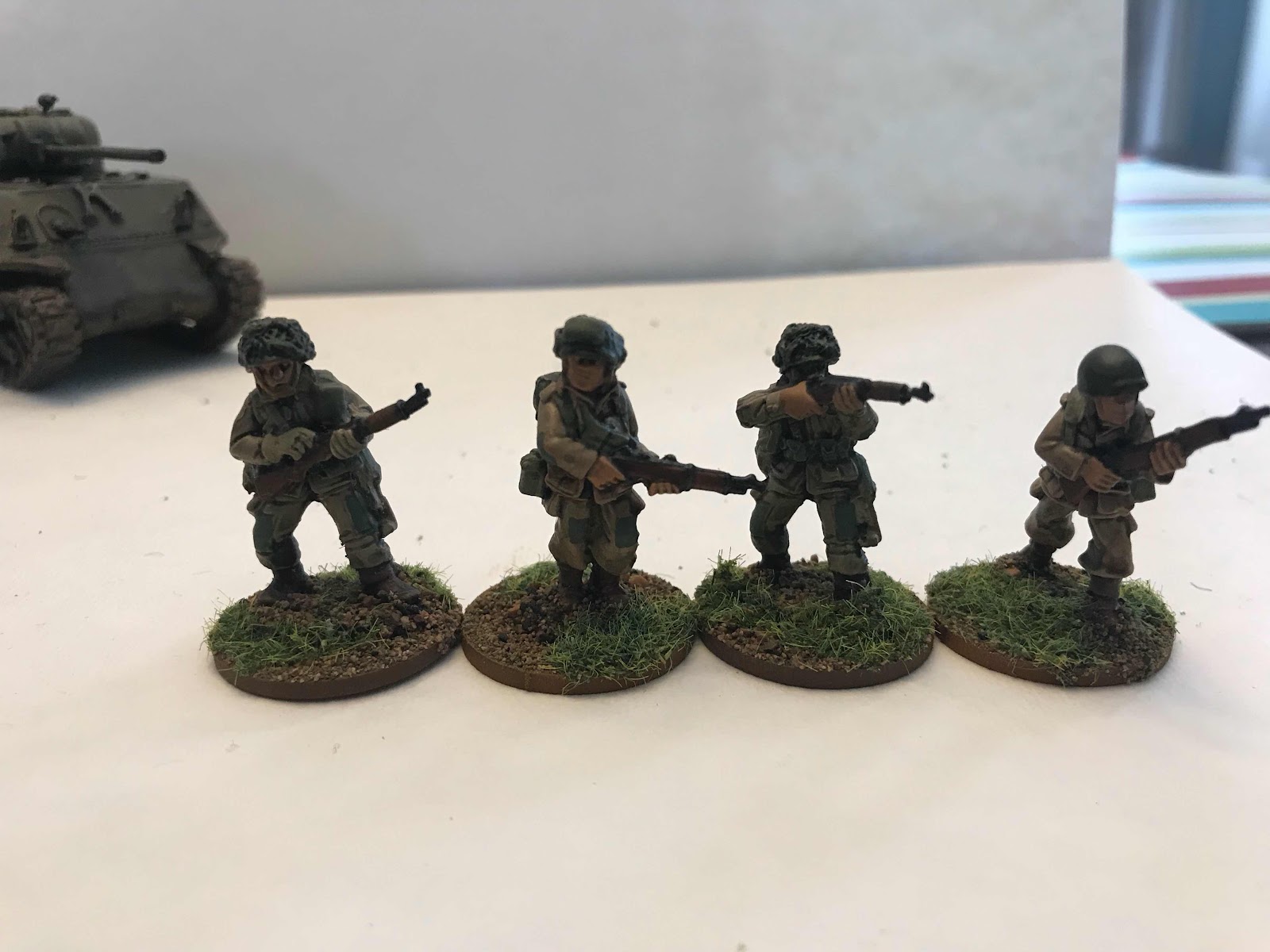 Hey, wait, I got a new complaint.
Or maybe a new solution.
I have loads of miniature boxes laying around with bits of sprue still inside, taking up space.
I figured I should probably get on the bits box train.
I quick trip to Dollarama got me sorted for $4.00.
I decided to start with my Oathmark Hunans and Dwarves.
I turned this 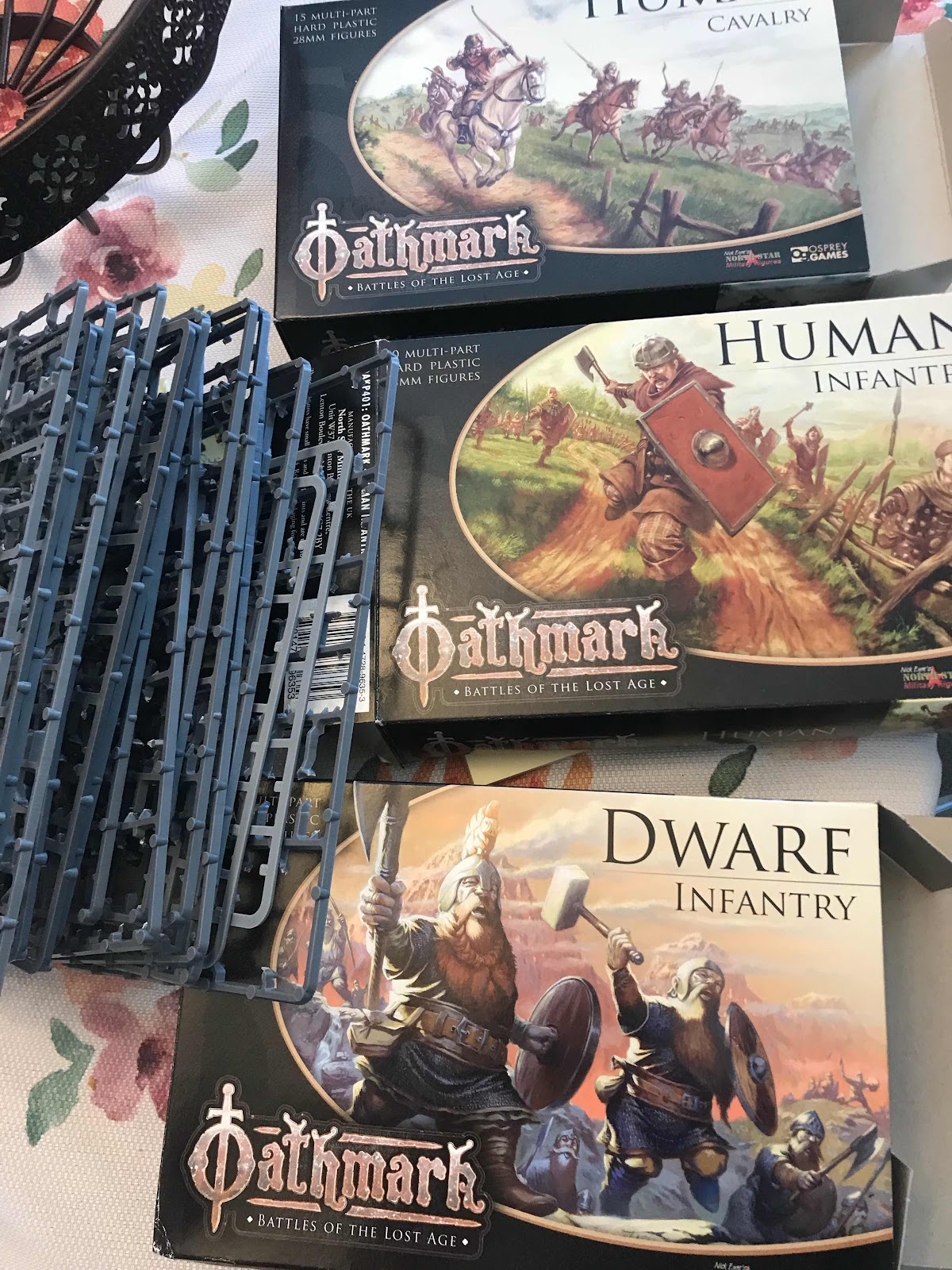 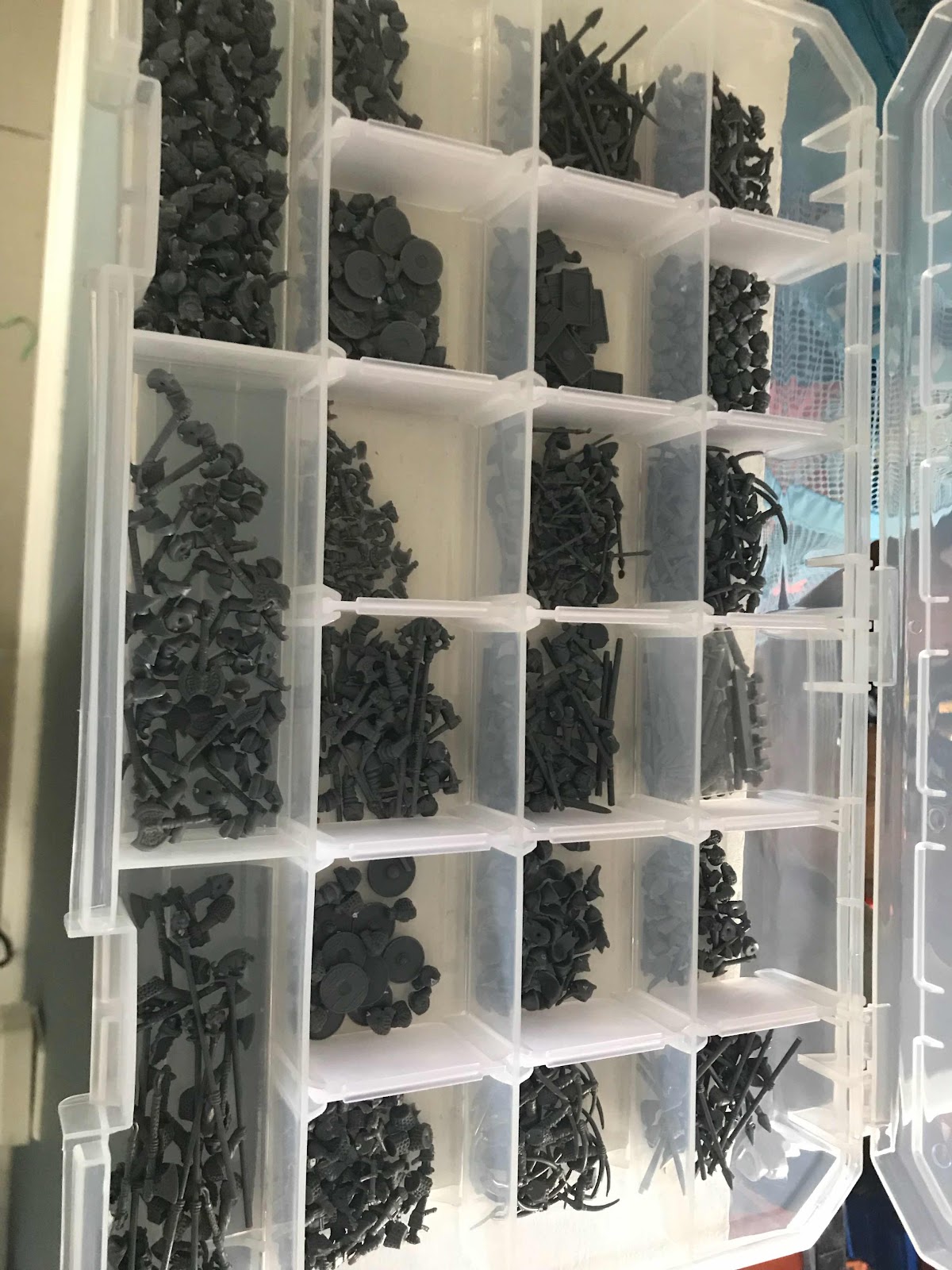 Except I forgot to take a photo. To be added soon.
Really feel great about the progress but man, is it ever tiresome snipping bits. Oathmark Dwarf heads are especially annoying.
Posted by John Freeman at 18:21 No comments:

Email ThisBlogThis!Share to TwitterShare to FacebookShare to Pinterest
Labels: Oathmark

I got the Clone Wars Legion boxed set today for my wife and my 12 year anniversary today.
I built Obi-Wan, the clones and the Barc speeder.
I put General Grievous together with 4 lightsabers and put the legs, torsos and backpacks on the droids.
Hope to do the heads and arms tomorrow (the worst part of the figures IHMO) and depending on that I’ll see if I touch the droidekas.
That’s all for now.
Posted by John Freeman at 19:21 No comments:

Hello there!
It’s been a while but I have some updates. My schedule at work had changed. No more Monday- Friday. Now I work 3 weekends out of 5. Bit shit I know but I do get a lot more days off overall.
First off, my Russian Civil War has been progressing nicely. I have a platoon of Mahknovists (Ukranian freedom fighters) and some more “Whites” ready to go.
My armoured train is mostly painted. Still have the tracks to do.
I received about a company’s worth of OOP Footsore Miniatures WWI Scots (which are now back on the website as of this week).
But none of that is at all related to Star Wars. That is correct.
This year I’ve picked up two B1 Battle Droid box sets and an upgrade set. I also got one box of Phase 1 Clone Troopers. Count Dooku and Anakin round out the set. I’ve painted them slowly but this week finished the bases of the droids and painted Anakin and the clones. All that is left are the bases and I am done. 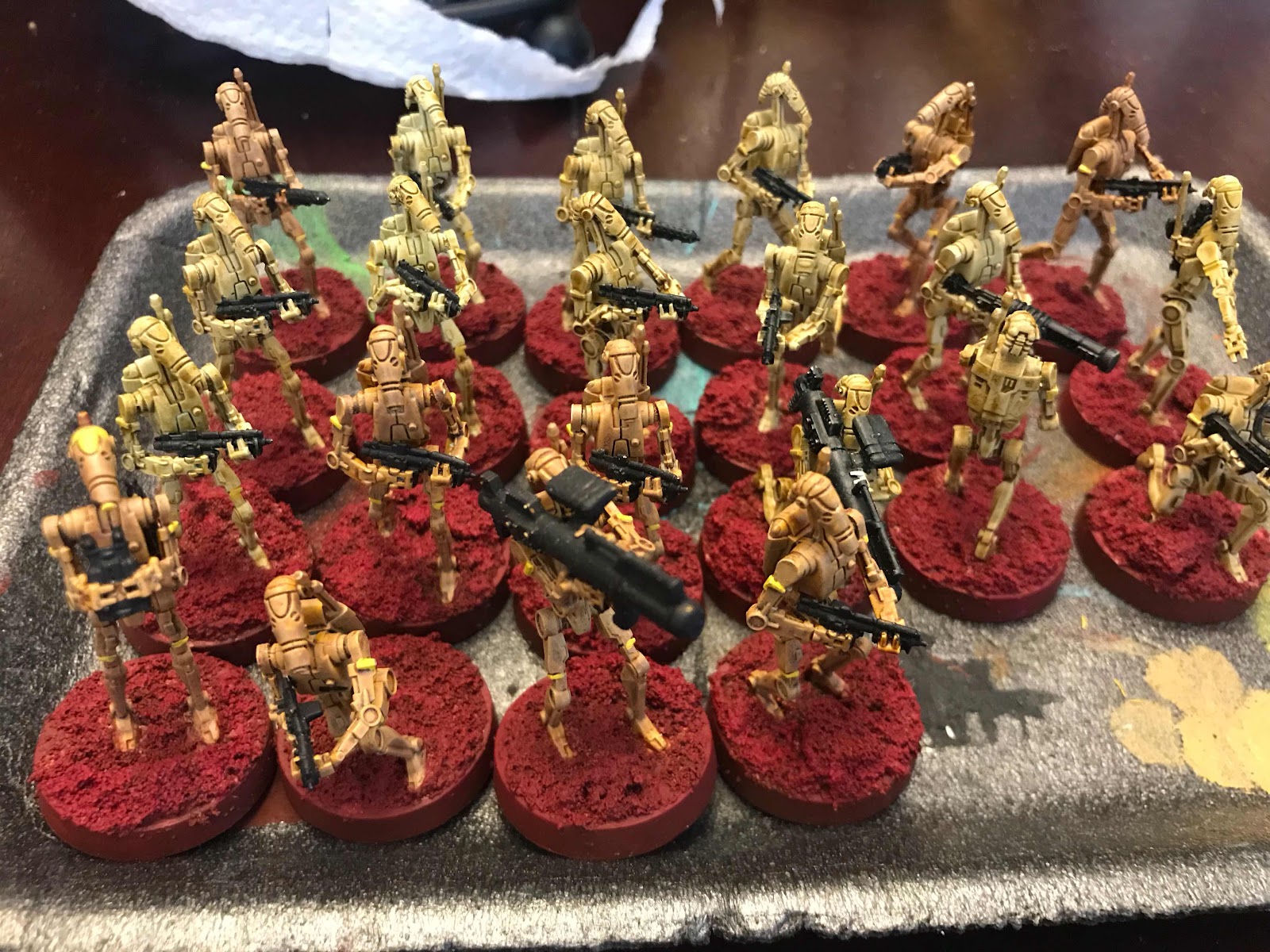 Here are the droids. I’ve gone with a Geonosis style of base. The keen eyes may be able to see two similar but different paint styles.
Here’s a close up: 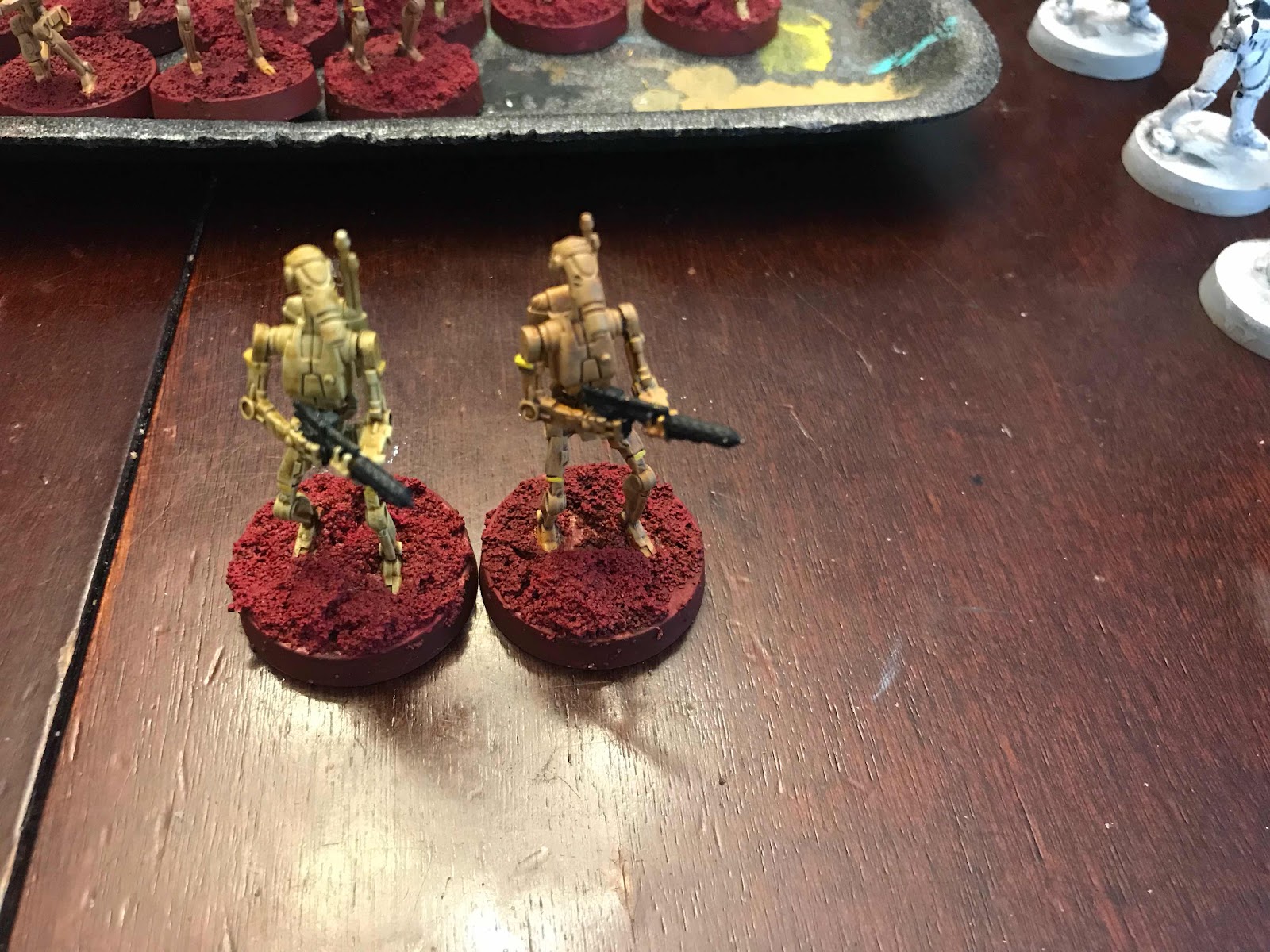 The left of is a mix of two contrast paints(light brown and bone).The right is a yellow contrast paint and a dry brush of a sandy colour.
I did the left squad first before watching a YouTube video and switching it up (going for the easiest paintjob possible here) a black contrast paint on the weapons and some bright yellow markings and voila. Done.
For the clones I should’ve planned it a bit better.
I primed in grey and realized I should’ve probably primed I’m white instead so I sponged on a coat of white. Then a dark wash for the recesses.A drybrush of white followed by a layer of white to highlight the top armour plates/panels.
Think on the next squad I’ll cut out a step or two to save more time. 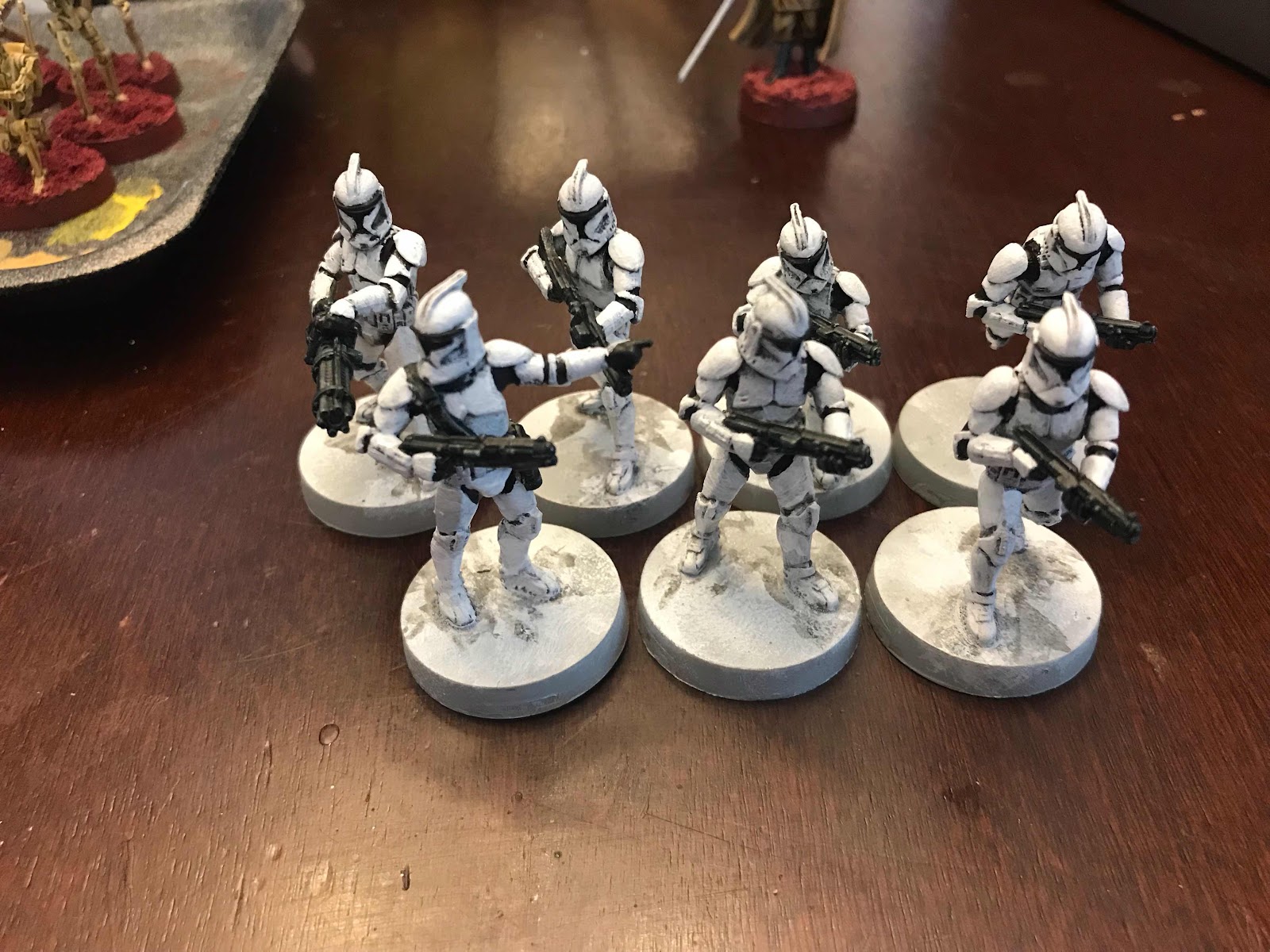 They look good from far but far from good. Whatever. I’m done with them.
Anakin was done using contrasts again. Not super happy with his face but I’ve always sucked at skin tones and he’s done. 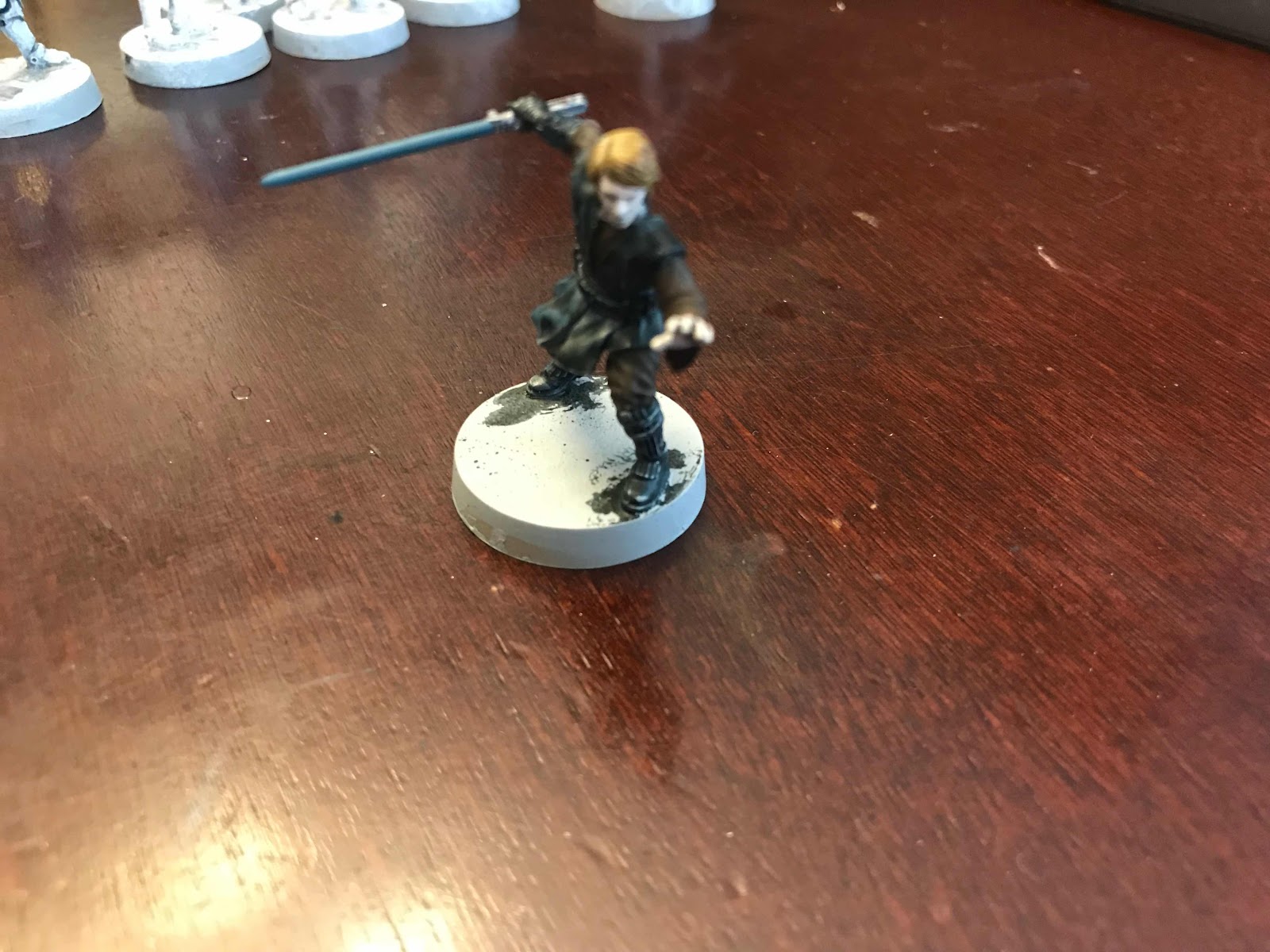 I also tried my hand at object source lighting on his  backside. More noticeable in person. 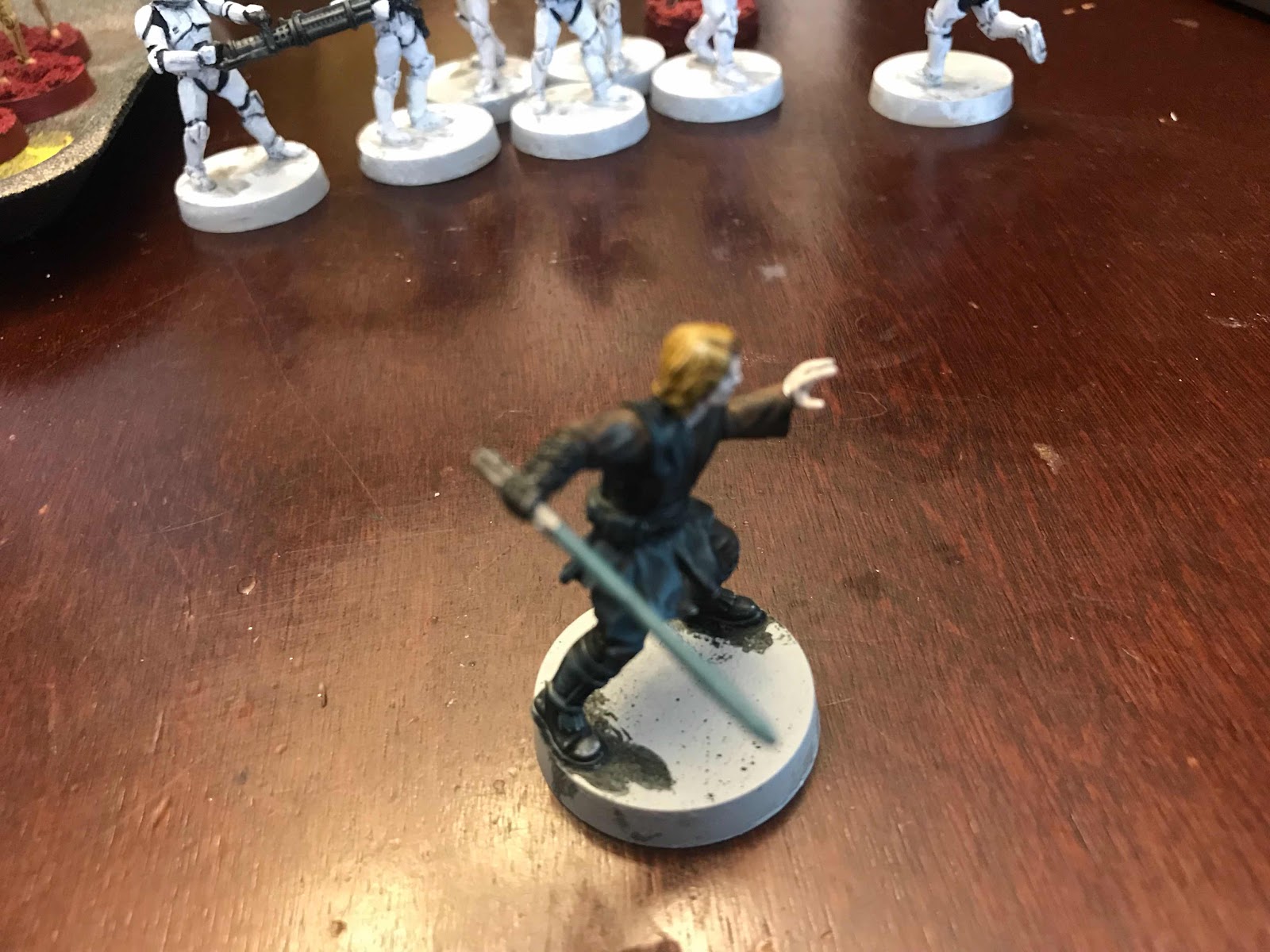 Lastly a tragedy occurred. My youngest was playing with these guys a few weeks ago. Dooku and a droid fell and broke. The droid’s arm was found but Dooku’s is lost forever. I’m hoping I get another left arm from somewhere and I’ll add it to the model. 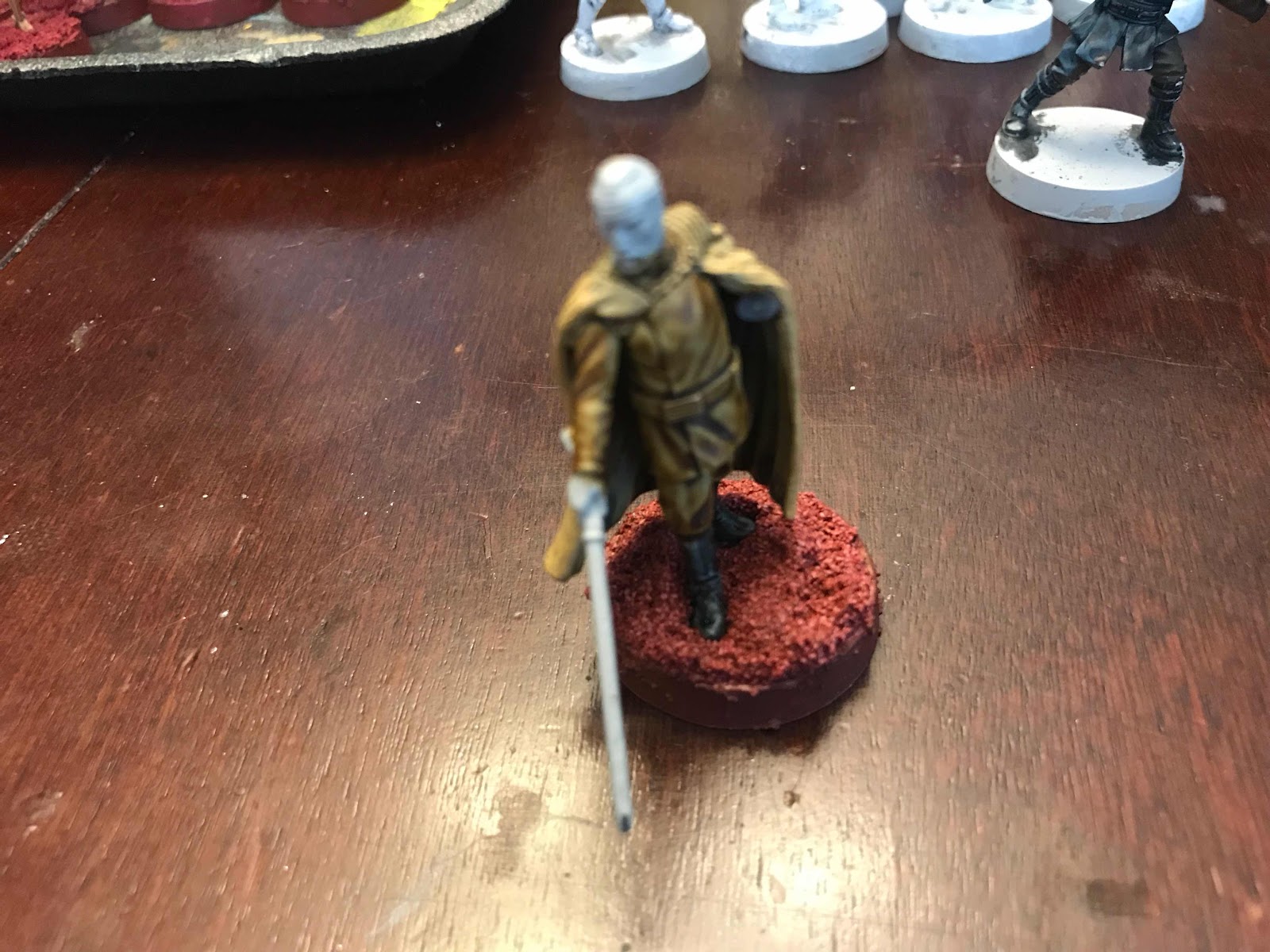 I haven’t the nerve to finish him as I might scrap the whole thing now. Minor set back but enough to derail me for now.
Anyways that’s it for now.
Posted by John Freeman at 08:15 No comments:

It’s getting warm out

The weather is slowly getting there.
We probably had the last “cold” spell on Monday and Tuesday until Thanksgiving. The days are getting longer. The temperatures are rising.
So what does one do on a day like this? Prime some miniatures! 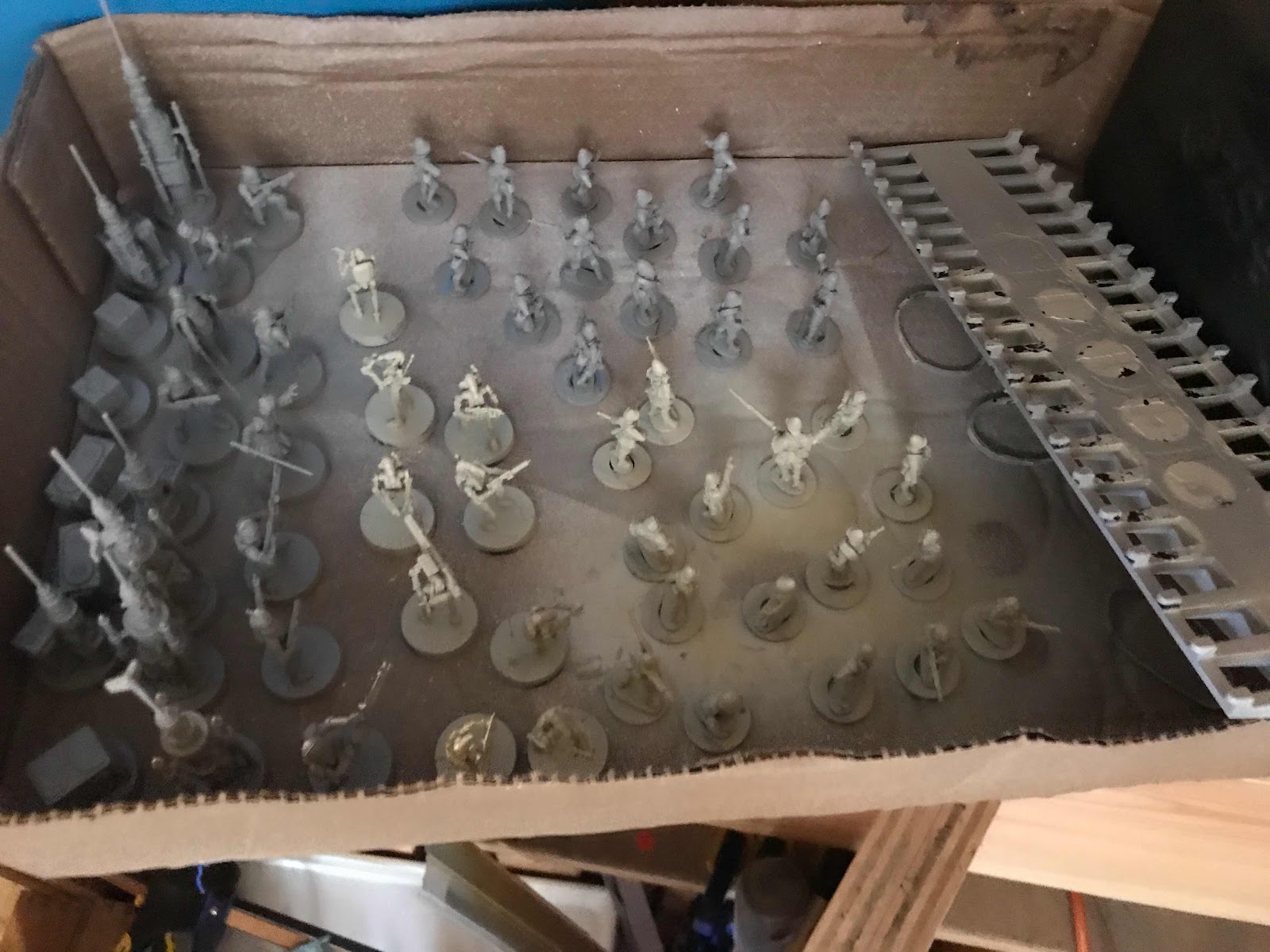 I primed my Star Wars Legion Phase 1 Clone Troopers (7 figures) Anakin, Count Dooku, Priority Supples and Artizan Designs French Foreign Legion (14 figures) in GW’s Grey Seer.
I primed my Star Wars Legion B1 Battle Droids (9 figures) and Artizan Designs NWF British (16 figures) in GW’s Wraith Bone.
The plan is to use contrast paints for most of the base coats and use regular ones for highlights etc.
I was lucky enough to grab one of the cans of primer discounted to $10 because the lid was broken.
The weird object on the side is my trusty Citadel paint stick. It’s a little bit of a ridiculous hobby tool but man, does it ever work.
And on a side note, I have a platoon of unpainted OOP Footsore Miniatures WWI Scots on their way to me. They are Early War and sculpted by Paul Hicks (slightly on the small side) but will be fierce opponents for my Germans.
Posted by John Freeman at 14:20 No comments:

Well, not really “finished” per se but I’m at a place where if I never bought another WWI German, I’d be fine with that.
That being said 😂 I have plans to add another Heavy machine gun, a grenade launcher, a sniper and a small unit (10) of Cavalry.
The miniatures are a combination of Great War Miniatures, Brigade Games and Copplestone Castings. 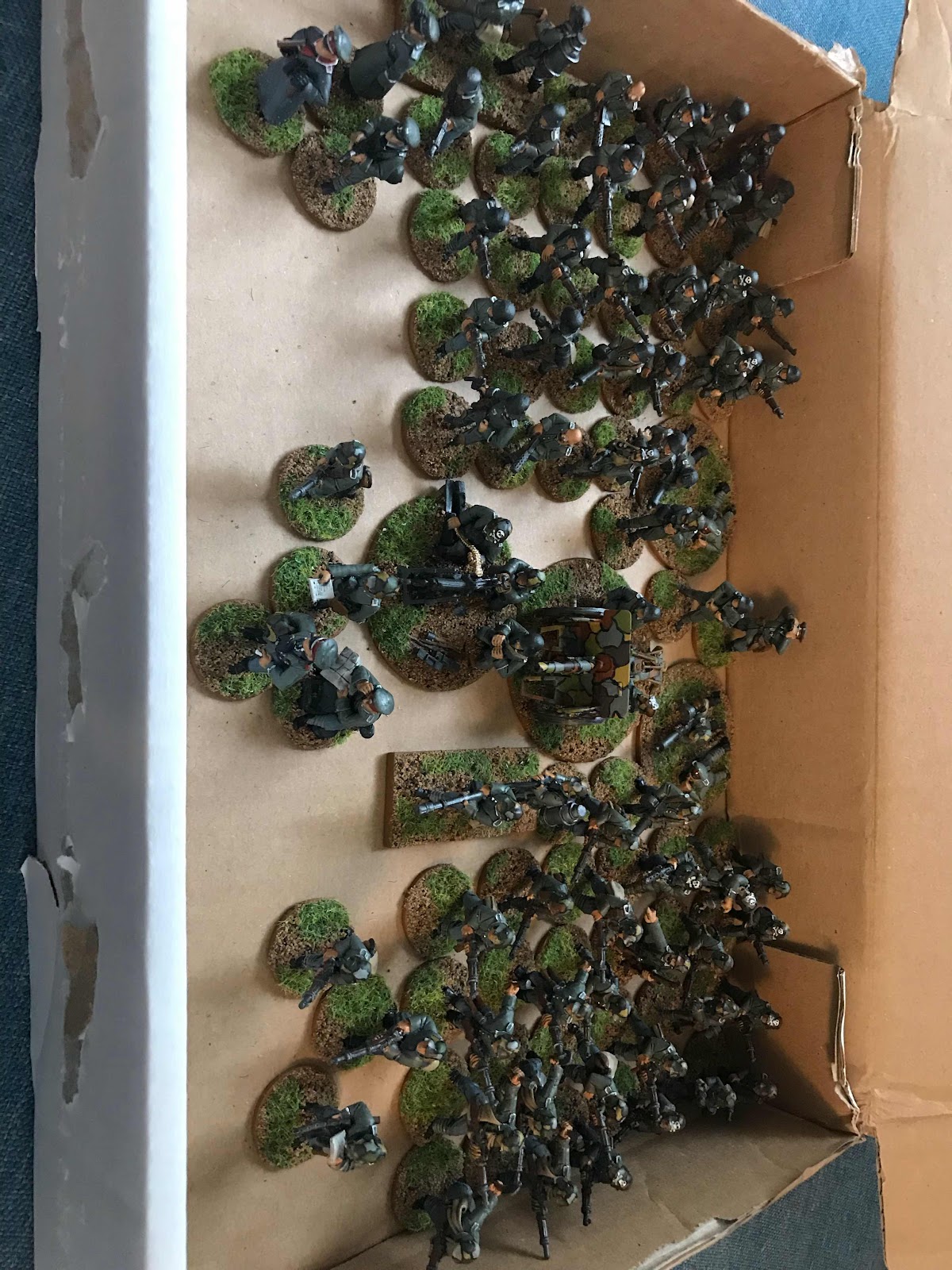 There are two platoons. One with plain helmets and the other with a camouflage pattern.
Each platoon is led by a 3-man command element.
There are three ten man squads.
Squads 1 & 2 have a Sgt, 8 rifles and a light MG
Squad 3 has a Sgt, 7 rifles and a flamethrower team.
The Camo squad three have grenades to indicate they are bombers/grenadiers.
There’s a 4 man high Command, heavy machine gun and a field gun rounding out the force.
For rules I have GW Historical - The Great War. However, Chain of Command is a great rule set and I’m super interested in the WWI variant.
All miniatures were painted by Karl Friedrich of Kura Creative.
Now I just have to finish the terrain boards I started last year. And buy the opposition forces...
Posted by John Freeman at 11:40 No comments:

The Light Elves are finally done

Quick post today.
I managed to put some texture paint on the bases of 27 light Elves a week+ ago. All that was left was the flock.
I don’t want to say I found the time but more like decided to get off my but and base them.
Here are the all of the completed Light Elves. Need to get a picture with the “regular” Elven figures. 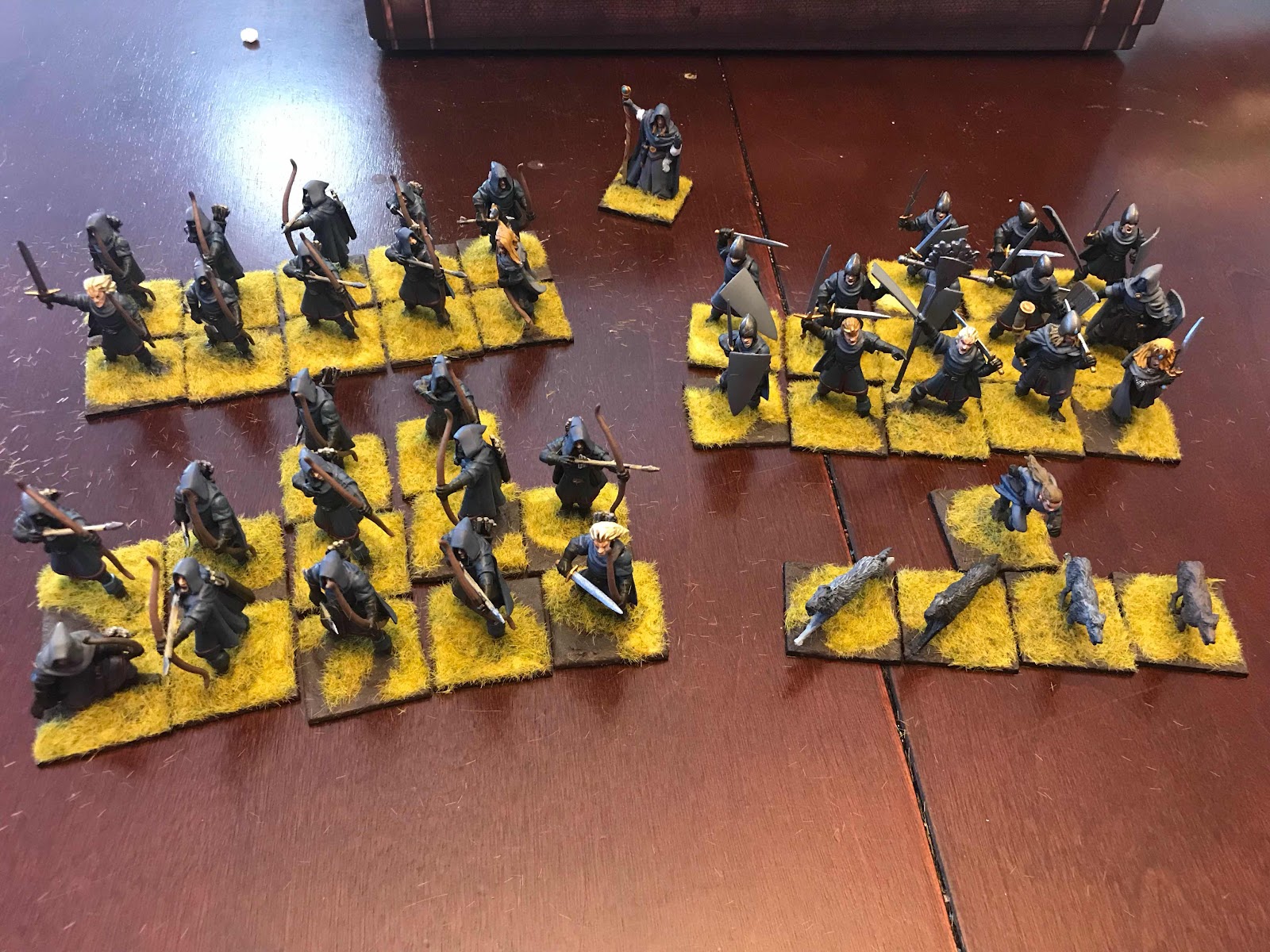 Posted by John Freeman at 13:19 No comments: